Hampton Family Builds a Future Thanks to Habitat for Humanity Home 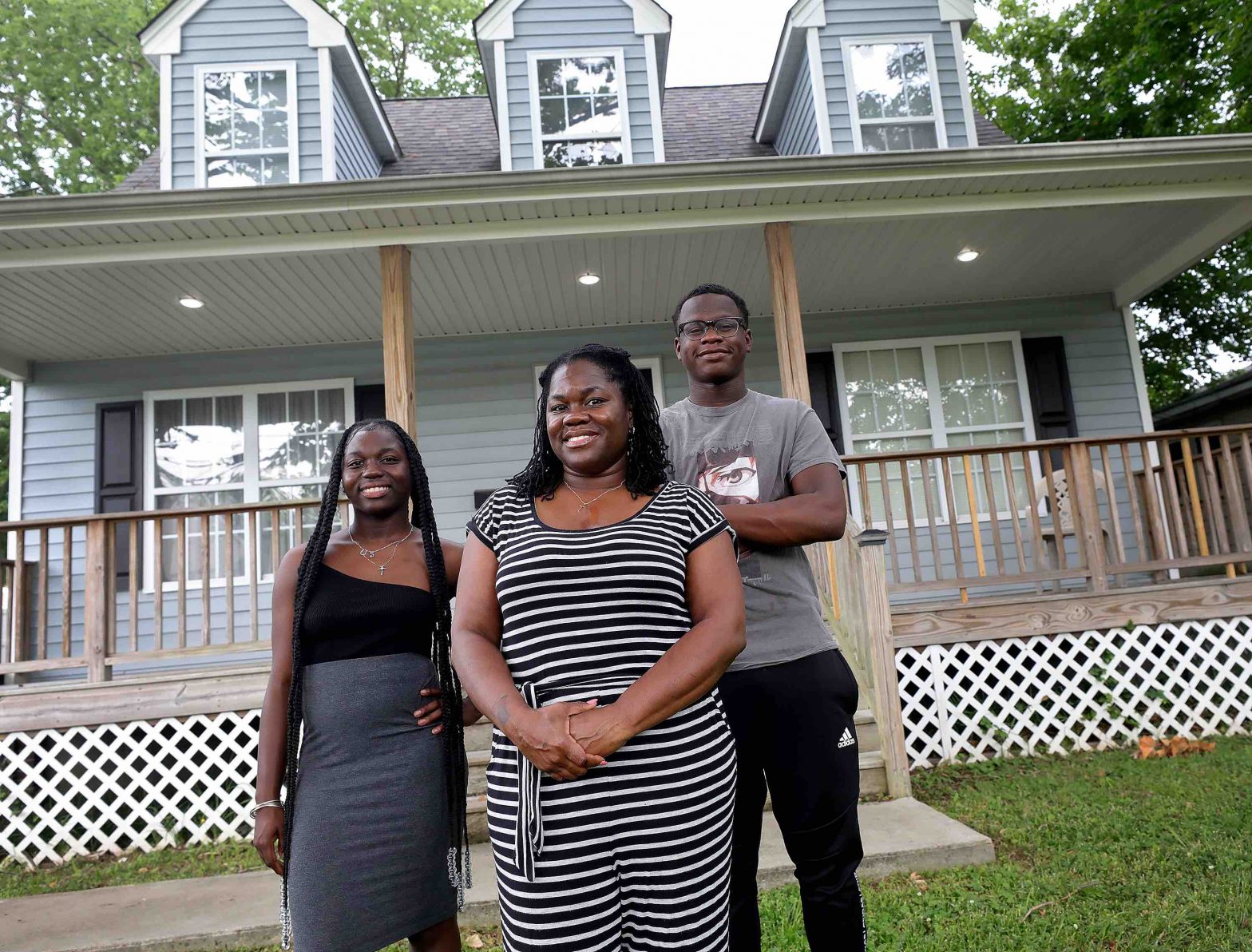 From making snow angels to tossing water balloons, from picking paint colors to updating shutters, from basketball in the driveway to milestone celebrations in the backyard, Cordella loves calling the two-story, three bedroom house on Hampton’s Ellington Avenue home.

When she moved into the Habitat for Humanity Peninsula and Greater Williamsburg home 13 years ago, her children, LeBron and Semoni were youngsters. Today, Semoni is a college junior, and LeBron has a semester of college completed. Cordella works a better job.

Habitat for Humanity changed their present but perhaps more importantly, impacted their future.

Habitat for Humanity Peninsula and Greater Williamsburg builds affordable housing in partnership with families in need of a decent place to live.

Back in 2005 when Cordella applied for the program, the single mother worked in a call center and returned to a cramped apartment at night. During the summers, she balanced two jobs to stay afloat. Nobody went hungry, but it was a struggle to keep up with the bills that come with paycheck-to-paycheck living.

“I always wanted to have a home, but I didn’t think it was possible,” she says. “I wanted to provide the American dream for my children, I wanted them to have a backyard, but that seemed like something that was for a two-income family. I was already stretched. I wouldn’t have qualified for a traditional mortgage.”

A friend suggested Habitat for Humanity. Cordella filled out an application to the homebuyer program and submitted it with a letter explaining her needs.

From there, “I waited and prayed,” she says.

The news that she would receive the opportunity to purchase a house to call home didn’t come overnight. Cordella reminded herself to be patient. But learning that yes, she had been accepted into the program, and yes, her home could be built in Hampton forged the start of a new beginning.

“It was a dream come true,” Cordella says.

Slowing down her words, she says, “It is a dream come true.
Cordella would not have been able to buy a three-bedroom home without the affordable mortgage she received through Habitat for Humanity.

“It changed my life completely. Being a homeowner puts you in a different mind frame.”

Cordella helped build it, part of the “sweat equity” that Habitat for Humanity requires to give homeowners a stake in what will become theirs. Cordella and her family moved into their new home on Nov. 8, 2008, an autumn morning when the flowers were still in bloom out front underneath a majestic tree that shades the front porch.

It was the first time in her life Cordella was able to say, “My home is mine.”

Cordella grew up in Newport News raised by a single mother. They would eventually go to live with her grandmother, but the house never belonged to them.

“To live in a house that’s your home, I never had that,” Cordella says. “I knew it was possible, but I didn’t think it was possible I could give it to my kids.”

Habitat for Humanity helped Cordella think strategically about her finances. She took financial literacy classes and improved her spending habits. She had always been cautious with money, but having her own home with affordable monthly payments provided stability and laid a foundation that her children could emulate.

“One of the biggest things is that my kids were able to see that we were able to own something,” Cordella says. “I was able to instill in them that they can own property. They can do it, too.”
Habitat for Humanity houses are not handouts.

“They’re hand-ups,” says Cordella, encouraged by the Habitat for Humanity Peninsula and Greater Williamsburg CEO to apply for a program with the Hampton Redevelopment and Housing Authority that provided matching funds for her mortgage.

Cordella paid off the mortgage in 10 years.

Since paying off her mortgage, Cordella has been able to save. The equity in her home provides the security of knowing she can handle an unexpected emergency. She was able to afford for Semoni to work toward her bachelor’s degree at Virginia State University. She is proud of LeBron, attending Thomas Nelson Community College before transferring to VCU. He wants to be a pharmacist and is already certified to be a pharmacy technician.

Cordella didn’t graduate from college. Without Habitat for Humanity’s help, she’s couldn’t have imagined a four-year degree being on her children’s radar.

“When you have something like this happen, the sky’s the limit. Your aspirations get bigger,” she says. “By just putting yourself in a different environment, in a neighborhood where your kids see what’s possible, that allows them to dream big.”

Cordella is grateful for all the memories the family has made in their new home — everything from backyard football to family barbecues. With the kids older, she doesn’t put up as many Christmas lights. LeBron has long outgrown the Ironman theme that dominated his bedroom.

But when Cordella returns home after work — she is just a three-minute drive from her job with Hampton City Schools — it’s not unusual for her to take a moment and reflect.

“I love Habitat,” she says. “Every time I pull into my driveway, I’m still overtaken with gratitude. Every time I turn the key, every time I’m able to do something for my children in my home, sit around our table and have dinner, I am extremely grateful. Habitat is always on my lips. I will always suggest to people who are working and want better for themselves, if you just need that one good thing to happen to help you, that one good thing to help you prove yourself, if you need that hope, that glimmer, fill out the application. If they can help you, they will.”

Be sure to mark your calendar for "A Celebration o