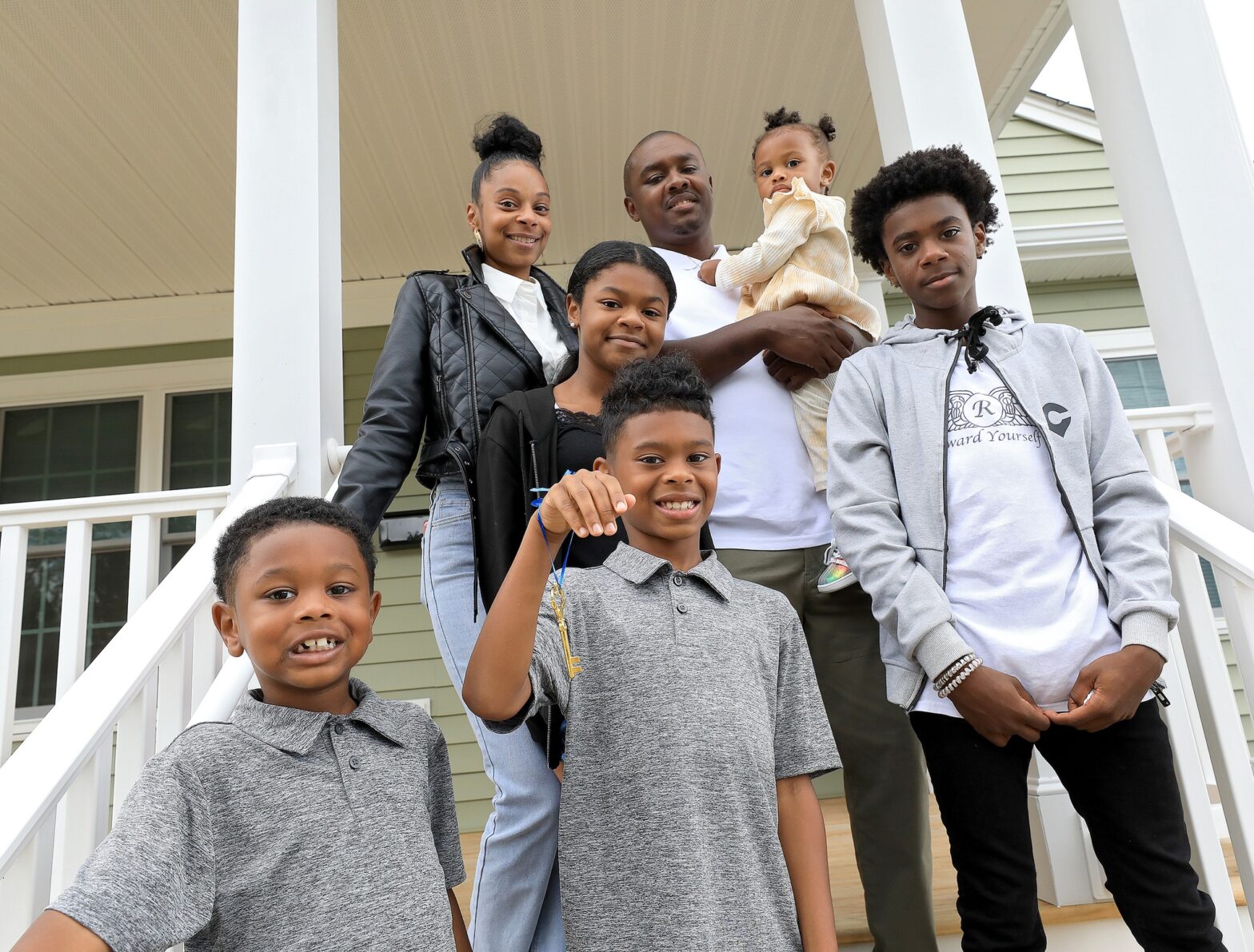 Habitat for Humanity Peninsula and Greater Williamsburg and First Baptist Church of Hampton dedicated a Habitat house to a family of seven on Oct. 1, the fourth home the two organizations partnered together to construct.

New homeowners Jeffrey and Tonya clipped the ceremonial ribbon while standing on the front steps of the three-bedroom, two-bathroom house that they will share with their five children, ages 2-14. The morning ceremony attended by First Baptist Church representatives, city officials, Jeffrey and Tonya’s pastor and other community members culminated with the family sharing their gratitude after years of challenges that started when Jeffrey suffered a serious knee injury that left him unable to work.

Jeffrey applied to Habitat’s Homebuyer Program in 2020, at the start of the pandemic.

“I never dreamed we’d be selected,” he said, standing alongside Tonya, their three sons and two daughters. “It’s been a journey to get here.”

Habitat’s first-time Homebuyer Program requires families to pay back zero-interest mortgages to the nonprofit over a 20- to 30-year period, funds that are recycled back into the community so Habitat can build more homes. The homebuyers must have good credit and steady employment and put in 300 volunteer sweat equity hours.

During the pandemic, Jeffrey and Tonya enrolled in Habitat’s required financial and homebuyer education classes, while trying to stay afloat amidst rent increases. Jeffrey completed his bachelor’s degree and started his own media, marketing and management company, but business was slow.

To complete their sweat equity, the family volunteered at the Newport News ReStore and helped at Habitat construction sites by caulking, painting and learning many of the skills they can apply to their own home.

Along the way, they navigated the deaths of Tonya’s mother and Jeffrey’s best friend in addition to COVID.

“Every day it was easy to give up,” Jeffrey said, noting doing the right thing for the future of his family pushed him forward.

He and Tonya are grateful for an extensive support system, including a local family that ensured they had stable housing when Tonya and Jeffrey’s rent increased to the point being unaffordable.

“There were times I didn’t think we were going to make it,” said Jeffrey, who like Tonya, is a native of Hampton. “Between all of them and Habitat and First Baptist Church, I’m so grateful. We wouldn’t be here without them.”

First Baptist Church’s partnership with Habitat stems from the wishes of its late pastor, the Rev. Joan S. Parrott, who envisioned a Habitat village in Hampton. Church donations and money from its mission budget fund each of the Habitat homes. During the home’s wall raising in April, several church members hand wrote inspirational messages and scripture verses on the home’s wall studs to inspire the future homeowners.

Virginia Hawkins, who is on the church’s Board of Trustees, noted “Habitat is very important to us at First Baptist. We believe we are our brother’s keeper.”

The church is partnering with Habitat on a fifth house being built in Hampton.

Habitat CEO Janet V. Green presented Hawkins with a commemorative plaque at the dedication ceremony, thanking her for the church’s longtime support. The family was presented with a Bible and symbolic key to represent home safety and security.

As with all local Habitat homes, Ferguson Enterprises donated the plumbing supplies. The doors and windows are courtesy of CVP Windows & Doors. The family received two bags of groceries from the Virginia Peninsula Foodbank and a welcome from Hampton Vice Mayor Jimmy Gray.

“This neighborhood will become great because you will be involved in it,” Gray said. “We’re extremely proud of you.”

Habitat for Humanity Peninsula and Greater Williamsburg has built a dozen homes in Old Hampton, a boon for that section of the city. A new community center recently opened nearby, and an aquatic center is in the works.

Jeffrey and Tonya look forward to making the home special by adding the personal touches they never felt comfortable doing before. Jeffrey said they didn’t invest in furnishings or home décor while they rented.

“I didn’t want to do that to a home that wasn’t ours,” he said. “I didn’t feel right putting pictures on other people’s walls. This time, we get to put our personality in our home. It’s ours.”