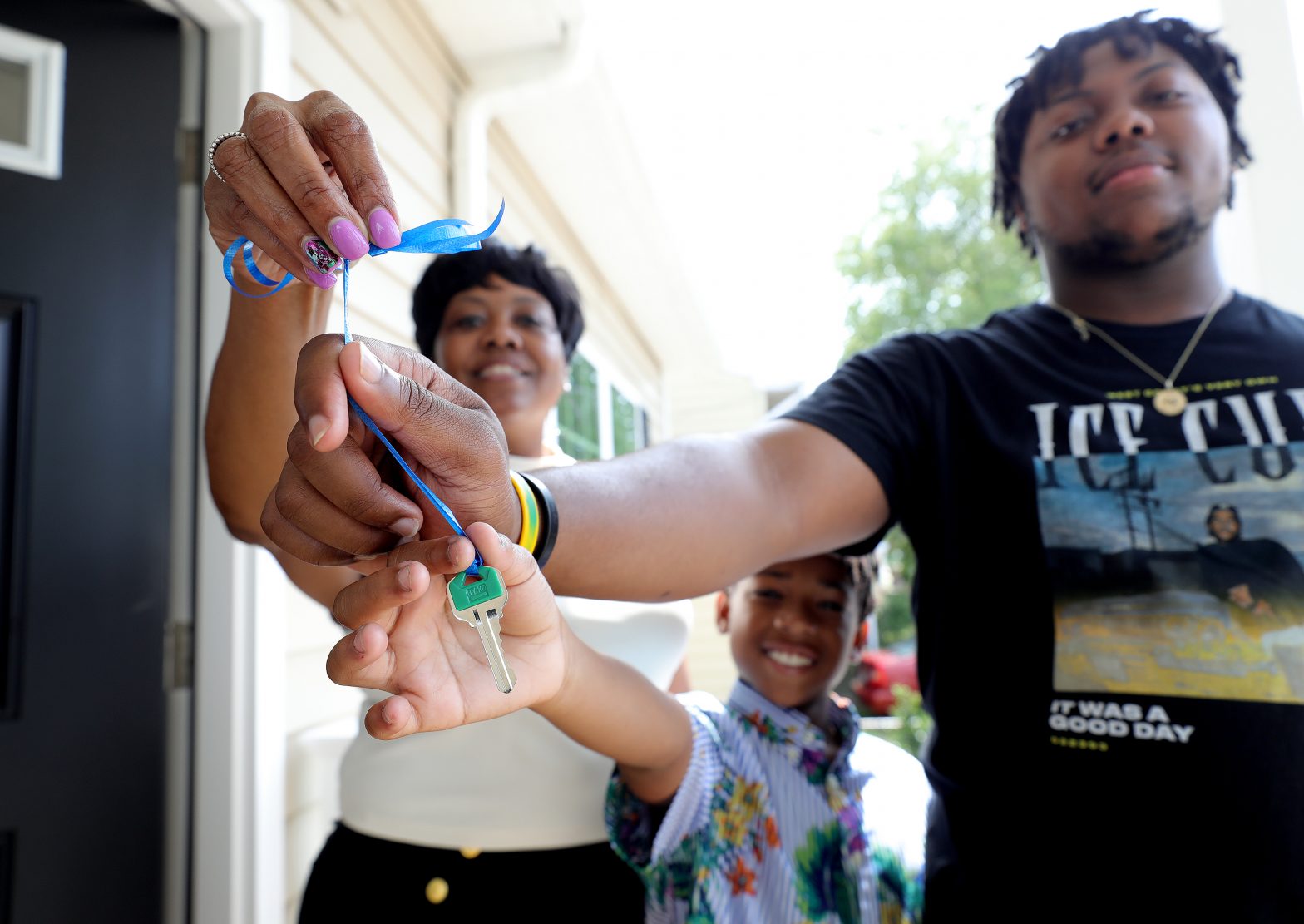 Mickeia is coming home, returning to the downtown Newport News neighborhood where she grew up.

The best part? She won’t be living in an apartment as she did as a child. Mickeia will be the first in her generation to own a home. She and her two sons moved into a three-bedroom, two-bath Habitat for Humanity house on June 16, culminating years of perseverance.

The house is sponsored by Newport News Shipbuilding, where her father, Mickey, retired after 35 years of service.

Mickeia first applied to Habitat for Humanity Peninsula and Greater Williamsburg’s Homebuyer Program years ago but wasn’t accepted. She listened to the feedback she received from staff and completed budgeting classes to increase her chances for the next application cycle.

“Before I dropped the application off the second time, I stopped by to see my grandma and asked her to pray for me to get this opportunity,” she says.

Learning from Habitat staff in person that she had been accepted overwhelmed her. Mickeia had lost her grandmother the month before to COVID, and she was marking the painful anniversary of the death of her daughter, lost in 2015.

“Just to hear I was approved meant so much,” she says. “It was bittersweet. My grandmother would have been so happy.”

Mickeia and her son, Cinque, made room in their busy schedules to log the required 300 hours of sweat equity. Mickeia, who works full time as a dental assistant for Riverside Health and is also mother to 9-year-old Nehemiah, volunteered at the Habitat ReStore in Newport News and worked on construction sites for other Habitat homes as well as her own. Cinque, a student at Norfolk State University, contributed to the roofing, siding and raising the walls at the house that will become home in mid-June.

The family was together for a Habitat dedication ceremony on June 16 where they will take ownership after agreeing to pay back the no-interest mortgage on time. The payments will be cycled back into the community so more homes can be built for qualifying families.

“This is a first for my family,” Mickeia says. “It’s like breaking a generational curse. I will be a first-time homeowner in my family of my two sisters and me. I’m excited actually to be moving back in the neighborhood I grew up in. There’s been a lot of rebuilding. I’m proud to see the improvements and be back there.”

Mickeia looks forward to her children having rooms of their own and traditional suppertime around the kitchen table, where her chicken pot pie and tacos are always a hit. TikTok has inspired wallpaper ideas, and a backyard will be the ideal place for her English bulldog, Bentley, to romp. Instead of always heading to someone else’s house for gatherings, she can’t wait to host her own.

“We want to enjoy making memories in our new home,” she says. “Having something that belongs to me and mine where I can have the say about what’s going on in my house and around my house — that matters most.”