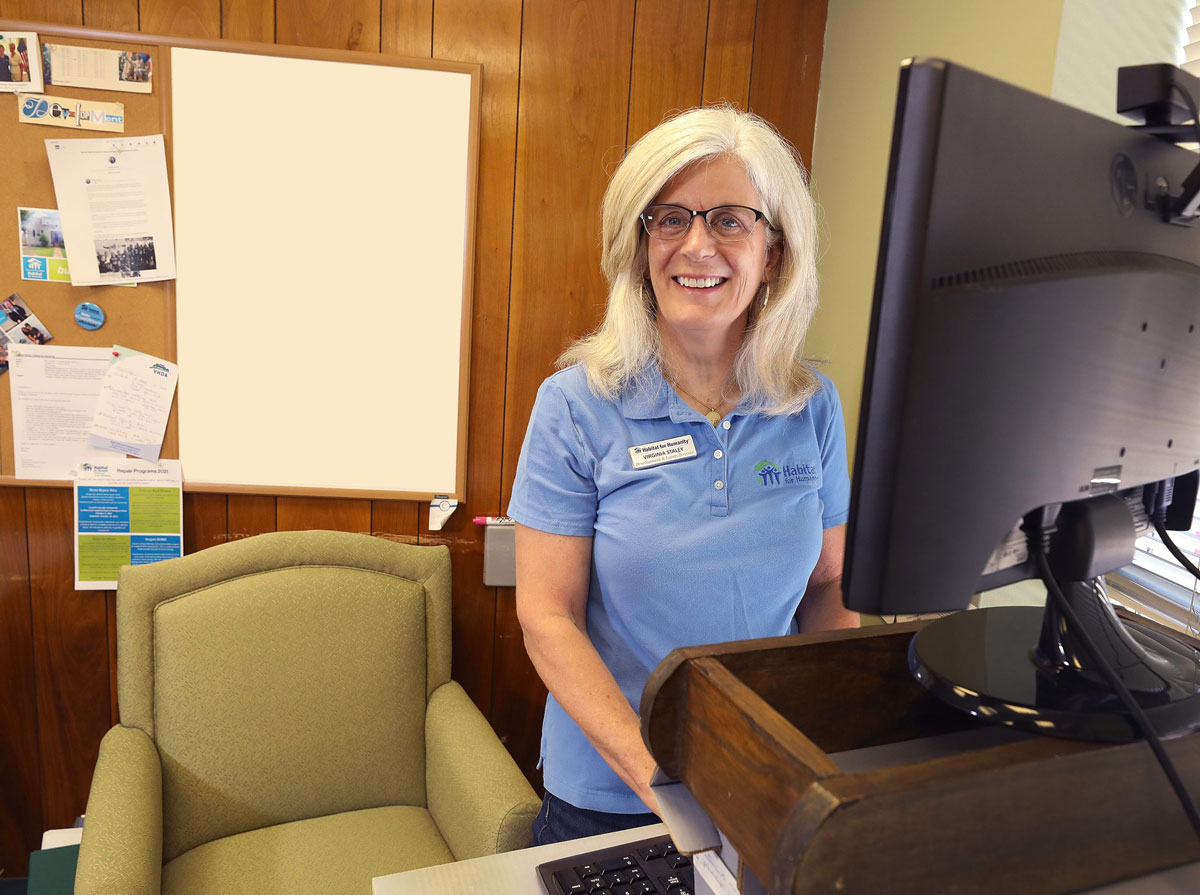 Virginia Staley volunteered at her children’s school and baked for just about every function. She served Thanksgiving meals to the homeless. Still, she yearned to do more. Her roots explain why.

Staley is one of 13 children, the 12th child of Aileen and George Liakos. He was in the Army and would retire as a Master Sergeant. Aileen Liakos was organized enough to have supper on the table every night (actually it took two tables to feed everyone) and hot water for baths (their East End Newport News home had just one bathroom, which was minus a shower). At the same time, Aileen was a tireless volunteer, always doing something for someone, whether it be at the hospital, her church or the polls on Election Day.

“My mother was all about service to others,” said Staley, Development & Events Director at Habitat for Humanity Peninsula and Greater Williamsburg. “I wanted to do more, to make an impact.”

As one of the youngest, she watched all of her siblings leave home.

“I was always the one planning football on Thanksgiving,” she said. “I was always organizing cookouts, figuring out ways to bring everybody back together. I liked parties and I liked entertaining.”

Staley earned an undergraduate degree in interdisciplinary studies at Old Dominion University. Inheriting her mother’s organizational skills, she worked in multiple capacities planning and juggling logistics — for the City of Newport News, and its nonprofit Newport News Occasions, and with her husband, David, in their own business.

Staley’s sister, Aggie, managed the Habitat for Humanity ReStore at its former location in Hilton Village. When Habitat was in a pinch having lost its events coordinator right before its charity golf tournament, she asked Staley to step in.

The Habitat office was small back then. Staley was one of four full-time employees and the construction crew consisted of three people.

Today more than 60 people work for the local affiliate of the national nonprofit. The ReStore outgrew its Hilton location for a larger one just off of Jefferson Avenue and a second ReStore in Williamsburg, now among the most popular in the nation, opened. Habitat strives to build 10 houses annually, operates a neighborhood repair program and advocates for finding solutions to the lack of affordable housing.

As Habitat has grown, so have its events. That first golf tournament that Staley oversaw attracted roughly 20 teams with 80 golfers, raising between $15,000 and $20,000. The last tournament brought in more than 100 golfers, and with the addition of sponsorship proceeds, raised close to $40,000.

Habitat’s Raise the Roof auction used to be held in the lobby of the Ferguson Center. Last year’s event was at the James River County Club. Attendance has doubled.

“We raised enough to build a Habitat home this year,” Staley said.

When Colonial Sports approached Habitat four years ago, a 5K fundraiser became another signature event, the Run The D.O.G. Street 5K held in the spring.

“With a gala, a golf tournament and a run, that really attracts different people and gives them an awareness of what we do,” Staley said.

Part of Staley’s job, too, is education, helping businesses and community organizations understand how Habitat works, dispelling myths that the mission is not about a handout but about a hand-up. Homes aren’t given away; they’re sold to qualified families who agree to make payments of their zero-interest mortgage back to Habitat so that money can be recycled into the community to build more homes. All proceeds from fundraisers support that mission.

“We go out to talk to businesses and a lot of times their employees don’t really know what we do, so we want to get them involved from the ground up,” Staley said.

When you make a difference every day, the work never gets old. The rewards go beyond celebrating with a family the day of its home dedication. That family will be part of its new neighborhood for the next 20 or 30 years, another positive.

“They’re shopping at the markets, going to the doctors’ offices, paying taxes,” Staley said. “We’re changing communities. There are streets you can drive down — Madison Avenue Newport News, Union, Parkdale, Reed Street in Hampton. You can pick out the Habitat homes. The neighborhoods we go into with our repair blitzes revitalize neighborhoods and make them beautiful again. People are happy with their homes when we leave. There’s a lot of giveback to the community when Habitat is part of things.”

It’s not surprising that Virginia and David instilled in their children — Mary-Clem, Matty and Elliot — how important it is to volunteer where you live. You can bet George and Aileen Liakos would be proud.