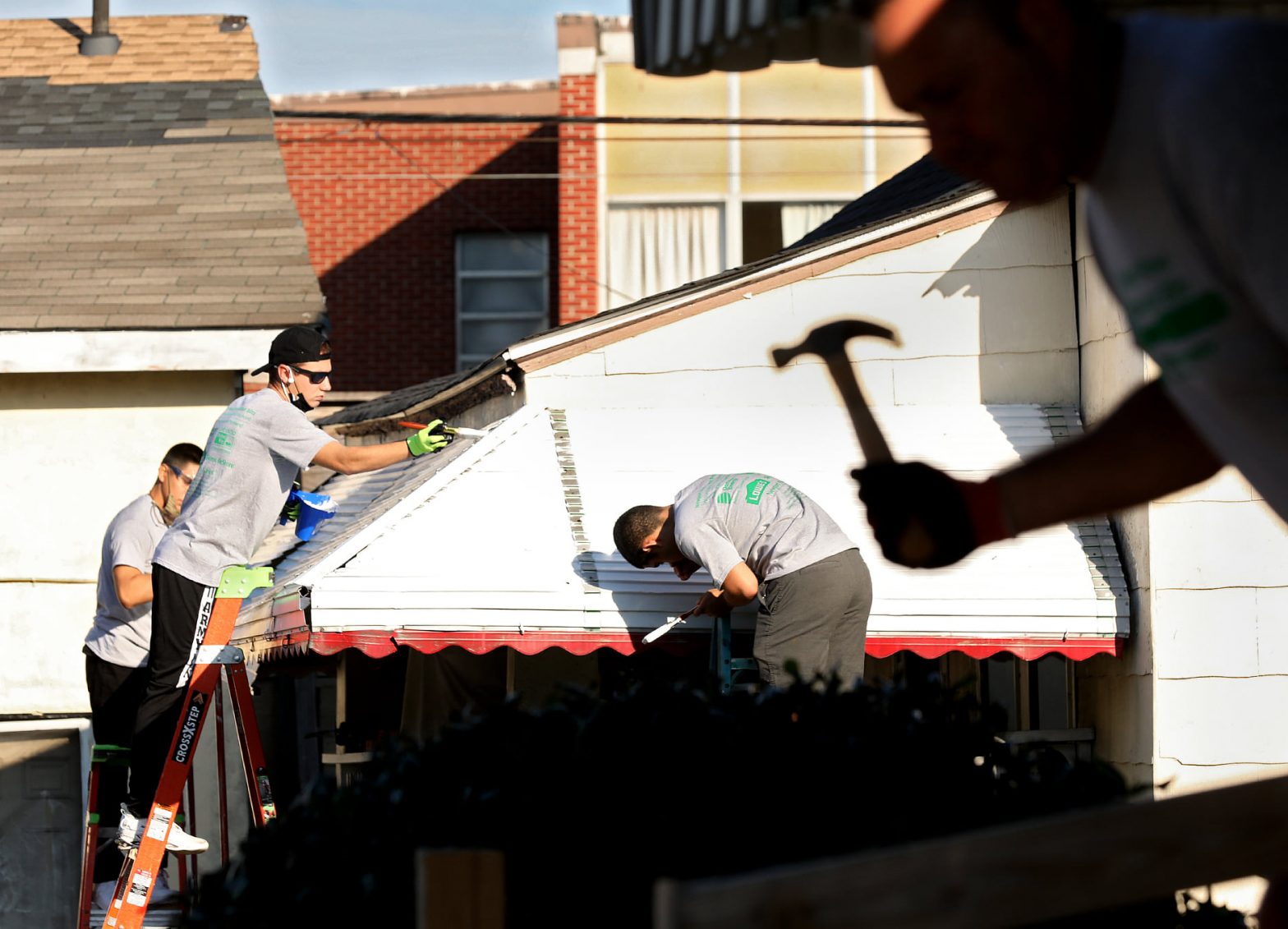 At first glance, the collection of folks gathered at Zion Baptist Church in the East End of Newport on a glorious fall Saturday morning didn’t look to share much in common.

Some wore shorts and sneakers and others donned work boots to go with their long pants. A few dressed in military fatigues. They were men and women of varying ages, some retired while others were high school students. As it was shortly after 8 a.m., several sipped coffee or toted bottles of orange juice.

All were there to support Habitat for Humanity Peninsula and Greater Williamsburg’s Repair Blitz, which is part of the nonprofit’s Home Repair Program. Habitat partners with municipalities and housing authorities along with local businesses to help homeowners in Hampton, Newport News and James City County neighborhoods make repairs to the exterior of their homes.

Volunteers supply the labor and donate their time to make a difference for homeowners unable to keep up with the upkeep of maintaining an older home.

“I do a lot of these kind of things and love doing them,” said Bruce Knight, whose son, Brandon Knight of W.M. Jordan Company, sits on the Habitat Board of Directors. “If we’re in a position where we can help other people, that’s what we should be doing. I enjoy this. I like the camaraderie, and the difference it makes in people’s lives.”

Knight gave six hours on Friday to work on repairing a wheelchair ramp on 17th Street, and on Saturday, he helped clean up the backyard of a house on Ivy Avenue where he joined a crew of soldiers from Fort Eustis.

Pam stood outside the family home that her grandmother bought in 1957. She grew up here and returned to live with her 80-year-old mother, who was undergoing dialysis that morning. The volunteers tackled several projects at once, taming the unwanted bamboo in the backyard, replacing siding, removing an awning, painting, and helping secure a damaged front door.

“Someone tried to break in and kicked the door in,” said Pam, standing underneath the walnut tree that supplied years of entertainment when she was a kid. Carted debris was making its way to the curb, including an old tire, a dilapidated lawn chair and rocker, and part of a car bumper.

Jammie is moving into her own Habitat home in Williamsburg, which is expected to be ready next month. Habitat homeowners put in 300 volunteer hours or what’s called sweat equity. Jammie has cut up shingles as part of the build for her home and was happy to lend a hand at the Repair Blitz to log additional time.

“You get to see how much hard work gets put into these homes. When you work on your neighbor’s home, you realize how much goes into a house,” Jammie said.

Lifelong friends Nancy Mosely and Dolores Parker went to New Orleans to volunteer for Habitat after Hurricane Katrina. Their children went to school together 50 years ago and the retirees from Upper Denbigh were excited to work side by side at a home on 21st Street.

“We’re hooked on Habitat,” Parker said. “We’ve been blessed so we came to help others out.”

Over on Hampton Avenue, students Sarah Peacock and Patrick Pearson tackled gutters with Michael Whalen, plumbing and pipefitting instructor at New Horizons Regional Education Center. Both seniors are in his class as part of the career and technical program there.

“I grew up around construction and love to do it,” Peacock said. “It’s nice to go out and help people in need.”

“This certainly beats sitting around the house on a Saturday morning,” added Pearson, who plans to enroll as an apprentice next fall for Newport News Shipyard.

Nicole Stephens, principal of New Horizons’ Woodside Lane location, joined them, focusing on caulking doorway cracks in preparation for painting. This is her second Habitat Repair Blitz. “It’s neat to see the transformation,” she said. “It’s cool to see what our kids have learned. It’s just about helping others and finding an opportunity to give back. We want to teach our kids once you acquire these skills, you have to serve others.”