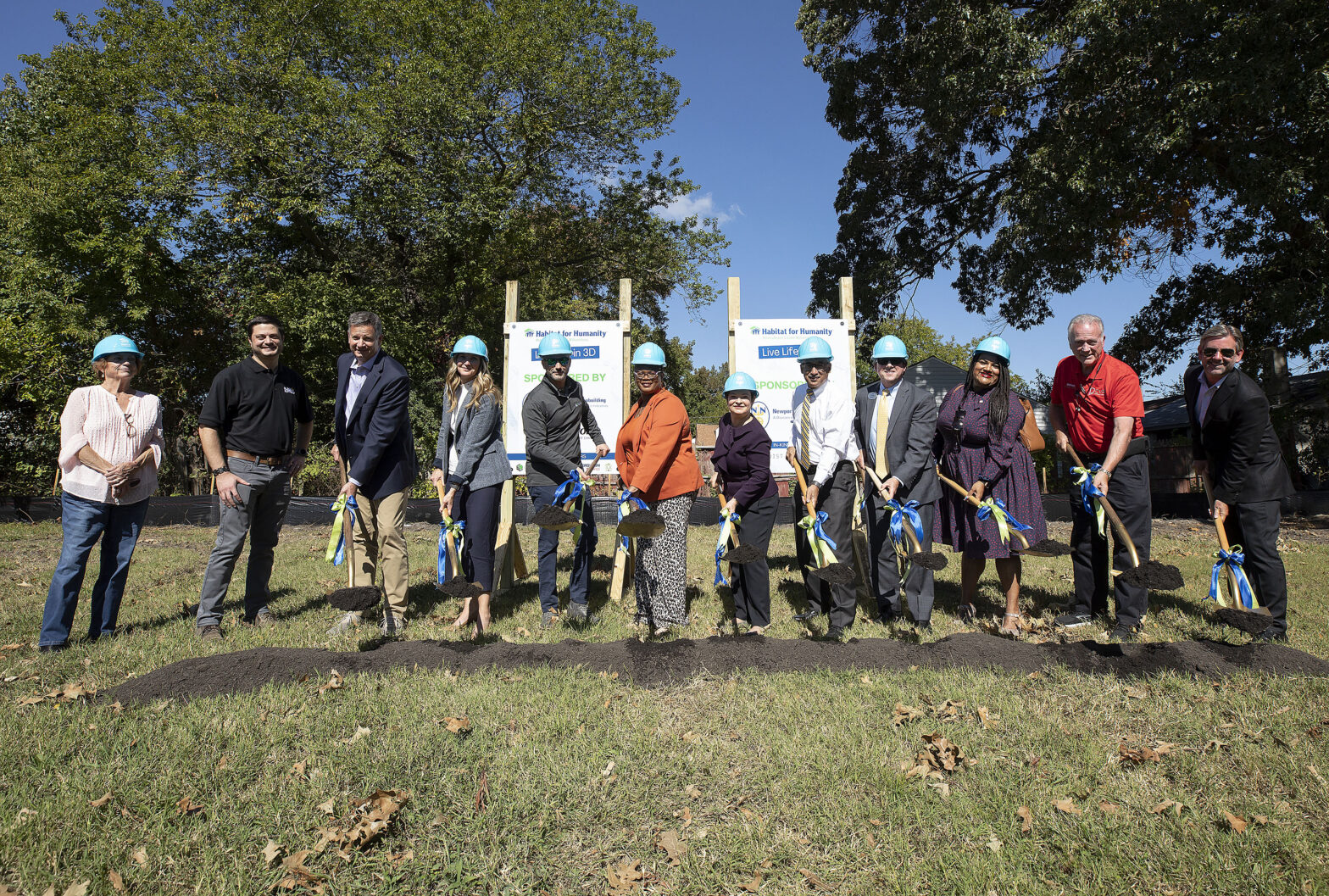 Newport News, Virginia — Habitat for Humanity Peninsula and Greater Williamsburg broke ground for two 3D printed homes on a sunny October 2022 morning, marking multiple milestones for the local affiliate of the international nonprofit that continues to work toward finding solutions in housing affordability.

The two houses located in southeast Newport News will be the second and third ones built using 3D printing technology, a cost-efficient, sustainable option that relies on concrete to print the walls of the homes, saving up to 15% per square foot in construction costs. Both homes that will be sold to local families will be approximately 1,200 square feet with three bathrooms and two bedrooms.

Habitat for Humanity Peninsula and Greater Williamsburg dedicated the first-ever 3D printed Habitat home in the nation in December 2021 to a Williamsburg family.

“It’s great to see Habitat leveraging this technology for the betterment of our community,” said Congressman Bobby Scott (VA-03) at the ceremony attended by federal, state and local leaders.

The two 3D printed houses will be the 20th and 21st Habitat for Humanity Peninsula and Greater Williamsburg homes sponsored by Newport News Shipbuilding. BayPort Credit Union co-sponsored one of the homes.

Jennifer Boykin, President of Newport News Shipbuilding, spoke about the transformative effect the homes will have for both of the families who will reside in them and the overall neighborhood.

“It’s exciting to see this kind of technology make a difference not just in our business but truly in our community. What’s truly going to be transformative is when these structures are complete,” she said. “That’s when two Newport News families will move in and call these buildings, these structures, home. All of that will encompass their ability to share love and build memories for years to come.”

Alquist 3D partnered with Habitat on the first-ever completed Habitat 3D printed home and will do so again for this project. The 3D printing construction company printed the inaugural house in less than 28 hours last summer.

“Our missions are not just aligned but incredibly complementary for what we do together,” said Zachary Mannheimer, Founder and CEO of Alquist 3D.

The Habitat Homebuyer Program received more than 250 applications from local families during its application season in the spring of 2022 — more than double the amount from a year ago.

“The need for affordable housing is so great, especially right now, for people both striving to buy a home or even finding an affordable, healthy place to rent,” said Janet V. Green, CEO of Habitat for Humanity Peninsula and Greater Williamsburg.

Habitat notified the families selected for the Homebuyer Program last month, and all are logging the 300 hours of sweat equity volunteer hours required to be eligible to purchase a house.

“The two homeowners selected for these two homes have steady employment, good credit and are partnering with Habitat by helping to work on other homes and working at our ReStores,” Green said.

The Habitat ReStores located in Newport News and Williamsburg sell new and gently used items at a fraction of the retail price with all proceeds benefitting the Homebuyer Program. Families who qualify for the Homebuyer Program agree to pay back their 20- to 30-year no-interest mortgages to Habitat, which uses the payments to build more homes in the community.

Habitat for Humanity Peninsula and Greater Williamsburg has built more than 215 homes in its service region that extends from New Kent to the Hampton Roads Bridge-Tunnel. Green welcomed the families in attendance, some from the other 19 homes built in partnership with Newport News Shipbuilding.

LaShand Coleman, whose family bought the 14th Habitat home sponsored by Newport News Shipbuilding in 2016, said living in that home opened up opportunities she would have never had.

“I will always continue to pay it forward,” said Coleman.

Boykin said the new 3D homes will be built in memory of a former shipyard employee. Matthew McQuade, an outside machinist for 32 years, was a tireless volunteer on every Habitat build of the homes sponsored by Newport News Shipbuilding until his passing in June.

Newport News Redevelopment and Housing Authority donated the land for the two 3D homes and has donated nearly all of the lots in Newport News where Habitat homes have been built. Custom Vinyl Products will donate the custom-made windows and doors, and Ferguson, as it does with every local Habitat house, will donate the plumbing supplies and all of the fixtures.

“This Habitat chapter is the most innovative, forward-thinking chapter in the United States,” said Karen Wilds, Executive Director of the Newport News Redevelopment and Housing Authority.