From the West Wing to Habitat for Humanity, CEO Janet V. Green Finds the Joy in Giving Back 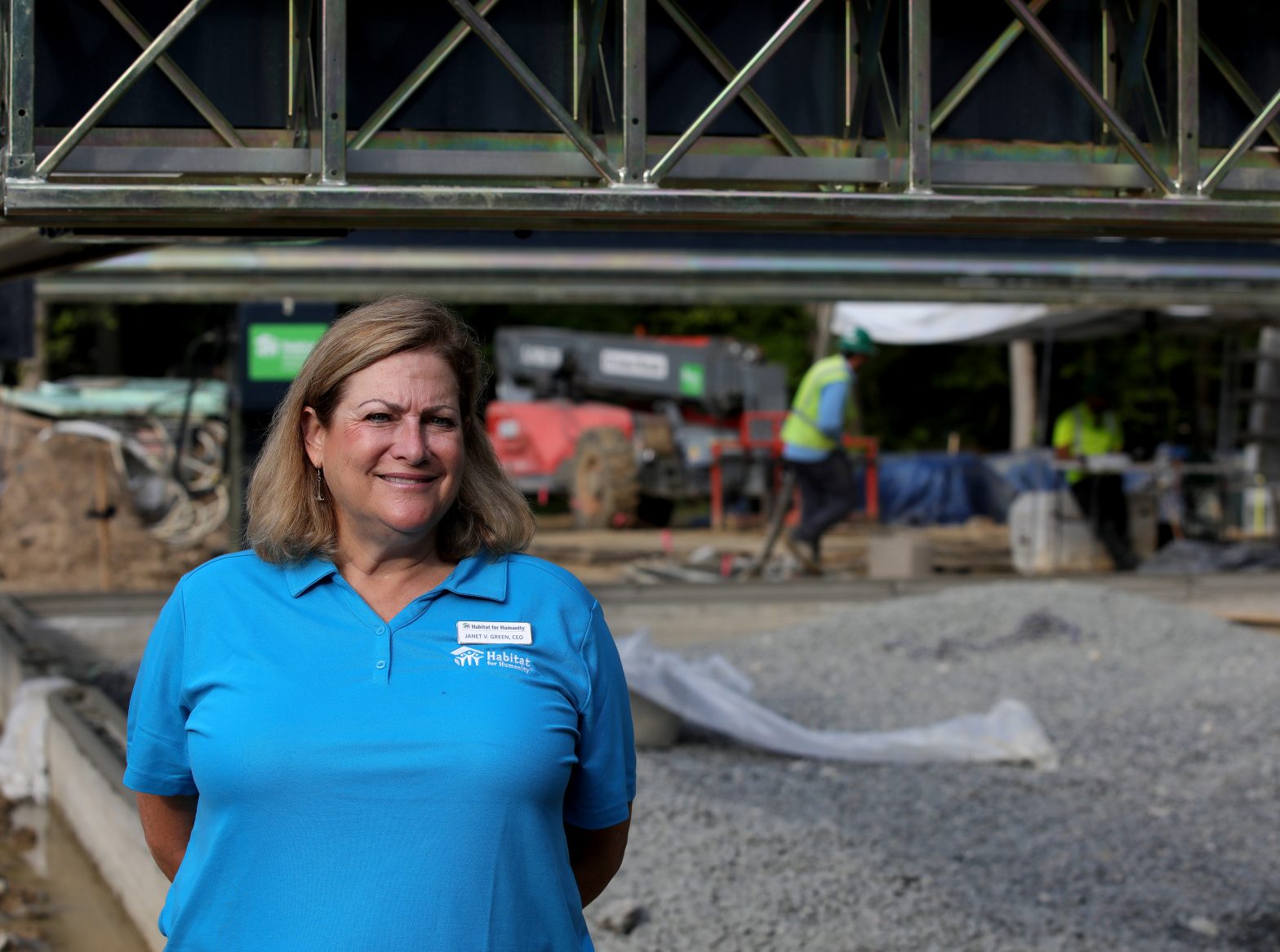 What excited Janet V. Green about working at 1600 Pennsylvania Ave., years ago also inspires her at the more modest address of 11011 Warwick Blvd in Newport News.

The former West Wing staffer is approaching her 21st year as CEO of Habitat for Humanity Peninsula and Greater Williamsburg.

“This is the longest I’ve ever had one job, and it’s because I do love it,” Green says from her office next to Greater Hilton Village.

Green is a fixture at every Habitat home dedication ceremony in the affiliate’s service area, which extends from New Kent to the Hampton Roads Bridge-Tunnel. That’s where families in Newport News, Williamsburg, Hampton, York County and Charles City receive the keys to their newly constructed home. All of them are first-time homeowners, grateful to pay back an affordable mortgage because of the stability having a consistent place to call home brings. Most shed tears. Green often does, too, but her eyes almost always rest on the children. These are kids who will finally have a room of their own to decorate, a backyard for play, a safe place to study, a gathering spot for family and friends.

Green doesn’t lose sight of their faces and often, years later, she sees how they’ve blossomed.

The son of a longtime Habitat homeowner recently received a full scholarship to William and Mary. A first call to his mom was followed by a second of gratitude to Green.

“A few weeks ago, I was dining outside when a young woman asked me if I was Janet from Habitat,” Green says. “She grew up in a Habitat house.”

The middle child among two older sisters and a pair of brothers, Green was born in White Plains, New York, but spent her high school years in Michigan. Wherever they lived, Green’s parents were active participants in their community, and Green was equally busy, an avid softball and tennis player and football fanatic. She majored in social work at Michigan State University, but an internship with a court program punched home a message that resonated, as she grew frustrated with the cyclical pattern of parents promising change only to repeat their mistakes due to the odds stacked against them.

“Work to change the laws,” a professor and mentor advised.

That thinking pushed Green to intern in Lansing for a congressman and, from there, she transitioned to campaign work.

“I was doing social work, but I was trying to help people on a grander scale,” she says. “I realized I could make a bigger difference working for politicians who believed in what I believe in.”

That mindset carried her to the White House as Operations Director for the Clinton Administration. While Green was used to long days and crazy hours, “The White House took that to a whole other level,” she says. “We didn’t waste a minute.”

Green dedicated much of her service to Clinton’s signature AmeriCorps National Service Program, which brought together people from all backgrounds to solve community problems and improve lives, a bipartisan initiative that continues today. She also worked on starting up the inaugural Corporation for National Service.

“My greatest hero from an early age was Eleanor Roosevelt,” Green says. “To be walking down the halls she walked at the White House was one of those ‘pinch me’ moments. Walking in every day, I knew I had a huge job to do.”

Green moved on to head the Democratic National Committee first as Deputy Convention Manager and then as its Executive Director. Three years in, her career path shifted, starting with the grim news that her mother, Lila, had ovarian cancer, a reminder that Green needed to be taking better care of her own health and wellness. Around the same time, she met Bill Williams, a judge from Hampton Roads, who she would eventually marry.

Early on, she lived in D.C., but caring for her mom along with a leadership change in the White House led to the Hampton Roads move, where she applied to be CEO of the local Habitat affiliate.

When Green was hired 20 years ago, she was one of three employees along with founder Lorraine Austin and a construction supervisor.

“I saw it as getting back to my social work roots,” Green says. “I could make a difference and help people and still affect the larger policies that would impact people locally and at the state and federal levels.”

Under Green’s leadership, Habitat for Humanity Peninsula and Greater Williamsburg mushroomed from its $250,000 operating budget to the more than $5 million organization it is today. The opening of two ReStores boosted funding considerably. When Green started, an advisory committee was at work on plans to open one ReStore in Newport News.

Today the affiliate manages ReStores in Newport News and another in Williamsburg that is ranked the third most profitable in the nation. Proceeds from both ReStores go directly to Habitat’s mission of building more homes in the community.

Founded in 1985, the affiliate built a total of 62 homes for families prior to Green’s arrival in 2003. Since then, 150 more homes have been built, with seven currently under construction. In addition, Habitat started a repair program that has helped hundreds of owners age in their homes.

Green’s ability to build collaborative professional relationships has enabled the affiliate to thrive with the support of community partnerships, legislative leaders and a diverse Board of Directors representing multiple sectors.

Green touts the tireless work ethic of the entire Habitat team for the strides the affiliate has made and recognizes that as much as the nonprofit has accomplished, more needs to be done.

She’s a believer in the ripple effect decent, affordable housing provides. When families spend less on housing, they can afford to spend more on other essentials, including groceries, transportation and health care. That spending contributes to the local tax base that feeds back into the community through government and infrastructure programs.

“The Bible talks about food and shelter,” Green says. “We’re the shelter part of that.”

While Green enjoys spending time with her two grandchildren, diving into a mystery book and relaxing by the water, her commitment to helping others still gets her out of bed energized in the morning. Her wish list is more of everything – funds to buy land, policy changes to benefit working families and innovative options to construct safe, affordable houses economically.

The affiliate unveiled the first-ever Habitat 3D printed home last year in Williamsburg, and Green is jazzed about maybe using Insulating Concrete Forms in construction next. The demo samples on her desk are as small as chess pieces and could be a gamechanger. Green was approached by a company that wants to explore that possibility for future construction.

“Our affiliate is proud to be on the cutting edge,” she says. “If we can build more affordably and faster while maintaining our safety and quality standards, why wouldn’t we? “Our motto is building homes, community and hope. We’ve really done that.”