Every Day is a Treasure Hunt for This ReStore Employee 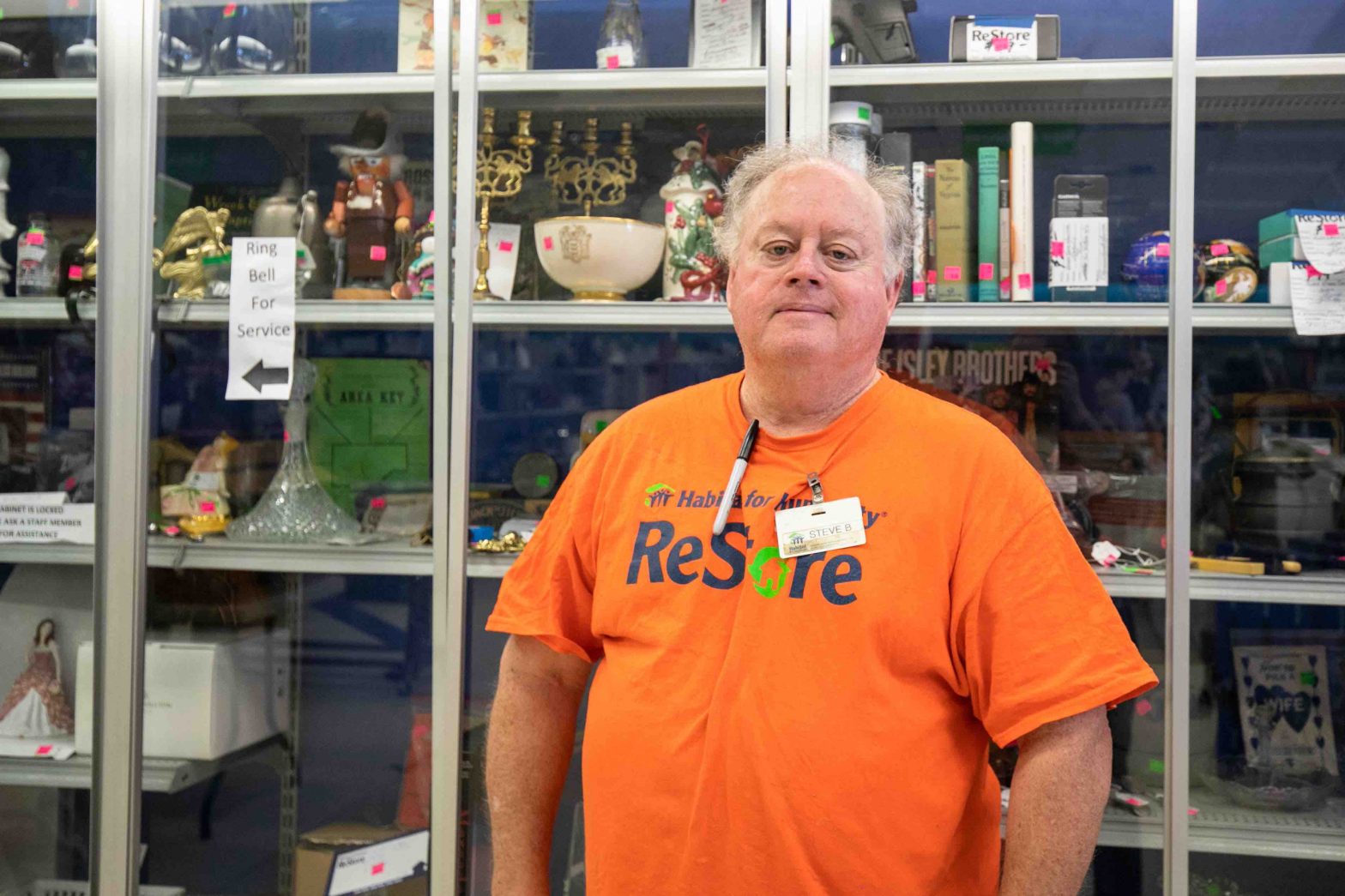 Steve Beauter is something of a sleuth at the Habitat ReStore in Williamsburg.

Donations there vary from furniture to tools to contracting supplies to accessories, all gently used and discounted significantly. Many are antiques, collectibles that are one-of-a-kind. A locked cabinet in the ReStore’s Colony section is full of these treasures —19th century French measures, a first edition of “Gorky Park,” a 102-piece set of flatware by Gorham, to name a few.

An ornate domed Stilton cheese server is hard to resist.

“There’s no marks on it,” Beauter says. “It was made in Germany probably between 1840 and 1880. Why Stilton cheese needs its own kind of plate, I don’t know!”

Beauter prices the donated antiques, relying on his ability to further research their history as well as the foundation of knowledge he built by working at Colonial Williamsburg for 30 years.

“I’m blessed or perhaps cursed with a very good memory,” he said.

Beauter regularly tunes into PBS’ “Antiques Roadshow” and History’s “Pawn Stars” and  “American Pickers,” and learns from each of these reality-based programs. A few years ago, the same octagonal cabinet with triangular draws featured on “American Pickers” showed up at the ReStore.

ABE Books and eBay are among the bookmarks on his computer, but even if Beauter finds an identical item on one of those shopping sites, he marks down the price at least 30% before putting it on the ReStore floor.

“I’m often dropping our prices from the lowest prices I see online,” he said.

No two days are the same. Beauter never know what awaits when he walks through the double doors into the ReStore, where inventory evolves constantly.

Unboxing an oversized porcelain base carefully boxed was memorable. The vase had been shattered and reassembled with staples and metal pins. Beauter discovered the technique used dated back to the 18th century.

“If you’re going to bother to put this thing back together, it was either valuable or important,” Beauter said. Unbroken, the vase would retail for $5,000. Ultimately, a local historical house purchased it for $750.

A donated painting from Canadian impressionist Laura Muntz Lyall sent Beauter online to his favorite art website where he discovered some of her works retail for $20,000. Further investigation led him to contact an author who wrote on Lyall who helped him conclude the painting came from Lyall’s first public sale of art in 1880.

“We got a good chunk of money for it,” Beauter said.

Other conversation pieces in the display case include a World War II holster, Columbian Naval metals, a historical book about Surry, a boxed Tiddlywinks game, a Talbot doll and a sterling silver creamer and sugar set.

Not everything dates back another century. Four cartridges for Game Boy, the first handheld game console, fetched a decent price.

Beauter didn’t know much about Habitat for Humanity prior to working at the ReStore. Nearly eight years into his job, he’s passionate about the nonprofit’s mission to build homes, communities and hope locally. All of the ReStore proceeds support that mission.

“I embrace the cause and try to get as much as I can for the donations,” he says. As much as Beauter enjoys what he calls “the adventure of the hunt,” he’d love to work alongside a volunteer who shares an enthusiasm for antiques and the meticulous process of pricing them fairly and correctly. If you’re interested in being that volunteer, Beauter at Sparkerb2461@aol.com or by calling the Williamsburg ReStore at 757-596-5553.